The song sheets posted here - are downloadable as PDF files. Though they are NOT exact transcriptions from the original sheet music, they are as close as ukulele playability allows. A lot of this era's sheet music had ukulele chord symbols included. (YIPPEE!), many of these uke arrangements were done by May Singhi Breen (Wikipedia). She must have uke-arranged hundreds, if not thousands, of songs during the 1920's and 30's.

In working up these uke versions I tried to stay stylistically faithful to the 1920's, keeping as many of the Augmented, Diminished, and Suspended chords as possible. BTW, learning all these Aug and Dim chords (as well as the Bar chords which are pretty essential) is fun and has made me a better player. If you need to simplify the chording, that's easy. Make all D7 chords, D chords. Make any Aug or Dim chord, just the simple root chord. You get the idea.

All of the verses are included as well. It seems that the choruses are what history has bequeathed to our collective (hundred-year-old) memory. The verses have dropped by the wayside over the years. This makes sense to my ears as the choruses are generally more memorable, catchier, than are the verses.

More will be added periodically. As this is just a hobby, don't expect consistency - in either format or an uploading schedule.
Some are scored out with melody and rhythms and uke chord diagrams. Others are just the lyrics with chords names above.


The Videos
These vids were recorded quickly (and very imperfectly) for your reference,
so you can get an idea of how the songs are played with the arrangements posted here.
All of these videos below are "first takes" unless I totally crashed, in which case it'd be a second take.
I probably should have waited to record these until I was able to play the songs better, but what the heck?
Since I'm recording these vids soon after working up the uke part, I've not memorized them and am OBVIOUSLY reading the scores.
These performances are, after all, just so you hear how the songs go. As I said earlier, they were recorded quickly and imperfectly.

HAVE FUN with these songs. That is the whole idea after all. 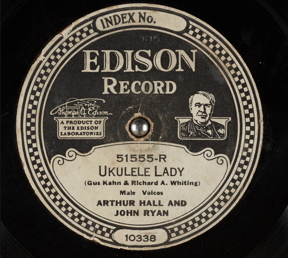 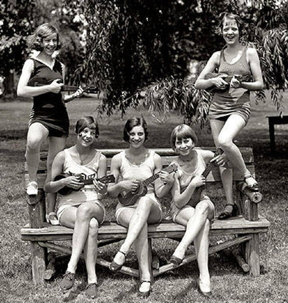 I flubbed the ending. Oops.

Barnacle Bill the Sailor - 19th Century.pdf
Anonymous
I first heard this song performed in the 1935 Popeye cartoon (click here to see it)
There are TONS of great songs in the Fleischer cartoons of the 1930's.

Not my best performance (a few goofs here and there),
but you'll get the idea of how the song goes so you can learn to play it
* Daffy Duck does a wonderful version of this song
in the 1946 Warner Bros. cartoon Book Revue. - (The song begins at the 4:00 mark.)

While looking online for the sheet music to "Carolina in the Morning" I stumbled on this song.
There's something about this one that really melts my butter.
Check out the 1930 version by Milton Charles (The Singing Organist) -
with animation by Leon Schleschinger (of Bugs Bunny fame)
click here to see the 1930 video
To today's ears this 90 year old rendition is hard to bear. Myyy, how popular tastes have changed.
Give it a listen. See what you think.

VERSION 1 - I Get A Kick Out Of You - 1934 - COMPLETE.pdf
By Cole Porter
This is the complete song, with verses, and the original chords.

VERSION 2 - I Get A Kick Out Of You - 1934 - SIMPLER.pdf
This is the Chorus only & has simpler chords.
This one is pretty easy and a fun song to sing.

I'm Sitting On Top of the World - 1925.pdf
Music by Ray Henderson / Lyrics by Lewis & Young
This is another one with which I took SERIOUS liberties.
This is probably not the final version. I'll most likely change the bottom section on page two.

In The Valley Of The Moon - 1933.pdf
Music by Joe Burke / Lyrics by Charlie Tobias

I really like this song. It's pure, simple, and very emotional. Nice chords too.

Livin In The Sunlight, Lovin in the Moonlight- 1930.pdf
By Al Sherman & Al Lewis

The first album I ever owned was "God Bless Tiny Tim"
which my folks gave me for my 10th birthday.
In about 2015 I learned that this song (as sung by Tiny Tim) was in the
very first episode of Spongebob Squarepants - CLICK HERE to see SBSP.

Looking For the Lovelight In the Dark - 1930.pdf
Music by Joe Burke / Lyrics by Al Dubin
I've found a number by this songwriting team I really like.

The Man on the Flying Trapeze - 1867.pdf
Music: Gaston Lyle / Lyrics: George Leybourne
The first time I heard this song was in the 1933 Popeye cartoon of the same name - CLICK HERE .

A lovely song that was featured in a heartwarming and heart-wrenching 1936 cartoon by Max and Dave Flesicher.
This song deserves a much better singer than am I. When sung well, it is quite lovely.
CLICK HERE for the Fleischer cartoon "Somewehere In Dreamland"

Minnie the Moocher - 1931.pdf
Music & Lyrics by Cab Calloway
This song is featured in the 1932 Max Fleischer-produced Betty Boop cartoon (CLICK HERE)
In the live-action intro to this Cab Calloway and his band perform "St. James Infirmary".
Later on he sings and dances (rotoscoped) the title song.

This was written by Joe Burke & Al Dubin, the composers of TipToe Through the Tulips.
There are like 20 different chords here, many of which are unfamiliar with tricky changes.
I wish that I were a better singer. This has a really nice melody and my limited vocal abilities don't do it justice.
This one is not for beginners, but it is a REALLY NICE SONG.

Painting The Clouds With Sunshine #2 - 1929.pdf
Different Arrangement
This is a more intersting arrangement with more chords and different chording on the repeats.
This is the one that I'm going to be playing.

Tip Toe Through The Tulips With Me - Version 1 (1929) .pdf
Music by Joe Burke / Lyrics by Al Dubin
This is from the original sheet music.
The cover of the sheet music spells out "Through". Inside, the title above the music spells it "Thru'"
This HAS THE ORIGINAL TWO VERSES that are not included in the two versions below.

Music by Joe Burke, Lyrics by Al Dubin
This performance is more like the way Tiny Tim's did it than as originally composed.
The 2 verses are not included.

Tip-Toe Thru' The Tulips With Me - Version 3 More Fun Tiny Tim Version.pdf
Music by Joe Burke, Lyrics by Al Dubin
Playing Tiny Tim's version is kinda boring.
This is somewhere in between the original and Tim's. More chord changes. The 2 verses are not included.

The Treasure of Your Love - 1958.pdf
Music & Lyrics by Barry DeVorzon

Filmmaker John Waters (Hairspray, Pink Flamingos) said that if he ever did a drag show
this would be the song that he'd perform.
Reading this (in his book Mr. Know-It-All), I had to hear it. It's a goodie. Ridiculously melodramatic. Enjoy.

I really like this song and took some serious liberties with the arrangement,
including adding some new lyrics at the end.
Having just finished up the arrangement and not knowing it by heart,
I am OBVIOUSLY reading the score
which explains my slack-jawed, cro-magnon look.
Go ahead and download the PDF. It is a fun one to play.

Who Put the Turtle in Myrtle's Girdle - Sid King - 1954.pdf
By Blackie Crawford and B. Herbert
The title of this song was mentioned in a comment to some article in the NY Times in March 2020.
Seeing this crazy title, I had to hear the song. It's kinda silly, d'uh!

Babooshka - 1980.pdf
By Kate Bush
This is a tough one to play, but once you get it, it's a great song to really belt out the vocals.
(Originally a half step higher.
If you want to play in the song's original key, slap a capo on the first fret.)

Don't Stand So Close To Me (Corona Version) - The Police.pdf

I wrote these altered lyrics, learned the song, and recorded it in less than 30 minutes.
Mistakes abound. Pardon my sloppiness. After all, this was just a goof.

Check out CocoRosie's original version from their 2013 album "Tales of a Grass Widow"
which has a cool riff and is much more interesting.
I've always felt that you can tell a "good song" cuz it will hold up
when stripped to its basics and played on just a guitar (or uke).
This is one of those.

Here There and Everywhere - The Beatles - 1966.pdf

Open Up Your Heart and Let The Sunshine In - Pebbles Flintstone & Bam Bam Rubble - 1966.pdf
composed by Stuart Hamblen
The recording by "The Cowboy Church Sunday School" reached #8 on the Billboard charts in 1954.
That recording is a child's voice (double tracked, I think) with organ accompaniment.
This is one of those "ear worm" songs. Hear it once and you'll be singing it all day.

CLICK HERE to see Pebbles and Bam Bam sing it

. . .and another one from The Flintstones

About six months ago I realized that I had first heard many of these 100-year-old songs while watching old Fleischer (Max and Dave) and Warner Brothers Cartoons,
You know; Popeye, Betty Boop (Fleischer) and Bugs Bunny, Daffy Duck, Sniffles the Mouse, Buddy, and Bosko cartoons (Warner Bros.).

Many cartoons were based on songs or had songs featured prominently. The Fleischers' toons were very music oriented. All the main characters (Popeye, Olive, and Bluto) sang frequently. Brother Lou Fleischer was head of the music department at their studio. They even produced a series of "sing-a-long with the bouncing ball" cartoons where audience members sang along. Lotsa music in the Fleischer cartoons.

In the early days of the Warner Brothers cartoon factory, the producers Hugh Harmon and Rudolph Ising (Harmon-Ising - get it? Those were their real names) were contractually obligated to include one chorus of a Warner-owned song in each cartoon.
I don't know if Leon Schleschinger (who took over as PRODUCER after Harmon and Ising left for MGM - see Cryin' for the Carolines above) was similarly obligated, but Carl Stalling (musical director under Leon S.) sure used a whole bunch of these old tunes, and some contemporary ones.

Here is a list of some of the songs I plan to work up and post here over the next bunch o' months:
many of which can be found in old Warner Brothers cartoons.

Baby Face (You've Got The Cutest Little)
Button Up Your Overcoat
Daisy Bell (A Bicycle Built for Two)
Downhearted
Faithfully Yours
The Flying Trapeze
The Fountain in the Park
Happy Days are Here Again
Have You Got Any Castles
I Ain't Got Nobody
I Love You, Believe Me
I Want A Girl (Just Like the Girl that Married Dear Old Dad)
I'm Looking Over a Four-Leaf Clover
I'm Sitting On Top of the World
If I'm Dreaming Don't Wake Me Too Soon
If You Knew Susie (Like I Know Susie)
It's A Long Way to Tipperary
Let Me Call You Sweetheart
Looking For the Love Light In the Dark
Louise
Masquerade
Say It Isn't So
Side by Side
Singing in the Bathtub
Smile, Darn Ya Smile
Sweet Adeline
We Just Couldn't Say Goodbye
Yes, We Have No Bananas LIke a Breath of Spring